skip to main | skip to sidebar
Have you ever felt like you just don't fit in? Like the world around you doesn't make sense and you're the only one who sees that? Well, I always have. And I feel like the answer is that .......
I was just born 100 years too late!

Music for my Soul 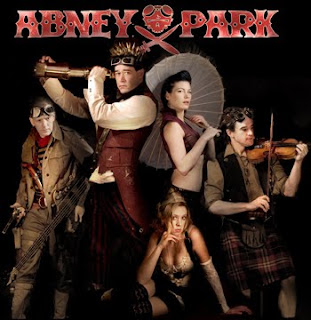 So, its Monday, the kids were back in school and it's likely the only day this week I'd have to run around and get stuff done (snow is being threatened from sometime tomorrow onward .... yes, SNOW!). So, I didn't "go to work" at AmiKami today (the joy of owning one's own business, I can take the day off whenever I want/need to!), got loads done and now I'm taking a little break from personal what-nots while the boys are outside expelling their pent up energy.

I was just sitting here listening to my current favorite band's new album - Abney Park's Aether Shanties. Love love LOVE this album and this band. For the uninitiated, Abney Park is a Post-Apocolyptic Steampunk band from Seattle (named for a cemetary in England - very cool) and they are amazing to listen to as well as watch live (still waiting for that pleasure, but have seen them on Youtube).

What is Post-Apocolyptic Steampunk, you may be asking? Well ... the "post-apocolyptic" part is self-explanatory enough, I think, but Steampunk is ... um ... hard to describe. For a brief, but fairly well written, explanation you can toddle over to wikipedia http://en.wikipedia.org/wiki/Steampunk

Anyway, I have always been attracted to the darker side of the Victorian era, but not exactly in the gothic sense. When I discovered Steampunk, I was like, "that's it!" Steampunk epitomizes those aesthetics and ideas that I tend to be drawn to and I love that it has a name, people who love it too and even music to set the mood. There are other great Steampunk bands as well such as Vernian Process and Clockwork Dolls. All these types of bands have their own take on the Steampunk sound, which is very cool.

Another phenominal group, that is fairly new to the scene, is The Clockwork Quartet. They currently have two songs (available for free download) and I understand more will be released this summer - which I have been on the edge of my seat for! Once you hear these songs, I think you'll understand my itching for more. They are totally unique and tell stories with their music - very dark and macabre type stories with a rich Victorian (yet, not old-fashioned) feel to them. Each song is like a piece of art. To check them out, go to their website : http://www.clockworkquartet.com/music.php If you've never heard of them before, I highly recommend listening to their songs (and you have to listen all the way through - its like a book, you just have to hear the ending!)

So, back to relaxing with Abney Park for a bit more before I start dinner ....
Posted by AmiKami at 4:57 PM