skip to main | skip to sidebar
Have you ever felt like you just don't fit in? Like the world around you doesn't make sense and you're the only one who sees that? Well, I always have. And I feel like the answer is that .......
I was just born 100 years too late!

So, today it seems that in movies marketed for kids, comedies rely heavily on bathroom humor (the more vulgar, the funnier - right?), profanity and insults. Is it any wonder that modern children have such potty-mouths?

Well, it wasn't always this way and I wonder why humor in today's society has changed so much. Is it just that there is no creativity anymore? Or that children are so easily influenced to laugh just because they are told something is funny? Or laugh because other people are laughing?

I have raised my kids with a great deal of exposure to old movies - especially silent films. One of the perks is that I can put on ANY silent film and not have to worry that age-inappropriate or distasteful material has been slipped in. We can just sit back and enjoy the show. 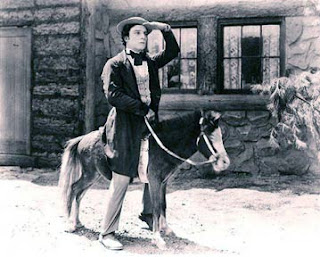 One of our favorite comedic actors from the silent era is Buster Keaton. My boys, at the tender ages (currently) of 12, 11 and 8, will be rolling on the floor in laughter at Mr. Keaton's antics. And here's the thing - Buster Keaton never smiled, he didn't speak (well, in the silent films anyway) and, most importantly, he wasn't vulgar and never used profanity, yet he was hysterically funny! With all the options for a laugh out there today, on tv and in the movies, I see the biggest, heartiest laughter from my children when they watch those classic silent comedies.

Another advantage to getting kids into silent films is it can be a fantastic aid in their reading! In order to get crucial information/dialog, they have to read the title cards. Having these movies on DVD is great for younger kids so you can pause the movie and give them extra time to read them. It's like the original LeapPad ... ok, not exactly, but they get so into the movie that they want to read the title cards to find out what people are saying.

Silent films can be interactive as well. There were certainly some silent films that were dull or filmed in a .... well, odd way. So, especially for those (but all films pretty much work), we make up dialog, what we imagine people are saying depending on their body language, etc. We can get outrageously silly and sometimes even completely change the movie depending on our imagination. Oh, and we don't resort to "updating" the film by injecting nasty, vulgar dialog - clean can still be funny!

So, I highly recommend picking up some good silent films for Family Movie Night. A note of warning, though, the younger the child the better chance you have of positive reception. For older kids who have spent their childhood immersed in MTV, PG13-that-should-be-R-rated movies, Family Guy and the like, you may have a bit of resistance (ok, maybe a lot!) But it's worth a shot (^_^)/

Don't think you're ready for taking the plunge into silent films? Then some of the best and funniest "Talkies" are the Marx Brothers Films. "A Night at the Opera", "Duck Soup", "Animal Crackers", "Horse Feathers" .... all are classic comedies at their finest and appropriate for all ages.